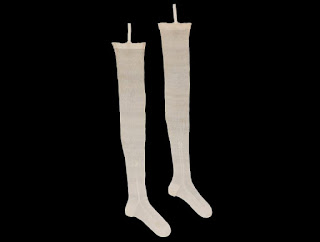 
Victoria gave away her clothing to servants and acquaintances throughout her life, including to Samuel and Eunice Bagster. Samuel was honoured by the Queen for his compilation of ‘Bagster’s Comprehensive Bible’ and Victoria also knew his wife and visited Eunice at her cottage in 1877. Among the clothing that the Bagsters received was a pair of cream silk stockings embroidered with crowns and the initials VR. Eunice Bagster’s care of the stockings that she was given by the Queen accounts for their survival until today.
Gepost door Nienke op 09:00